I would recommend reading Mistborn - Brandon Sanderson. I read it because a friend referred me to it and I am sure glad he did. I also heard that he is writing another series called Steelheart.

Here are some other good reads : Best New Fantasy Books and Series to Read 2014
Top

Steven Brust is on the list already with Dragaera, as he should be, but I would suggest two other possibles which skirt the definition of fantasy a bit, but seem to still fall pretty close to it (and are just generally awesome). "To Reign In Hell" tells the story of a sorta-Biblical creation from a very unusual perspective, and "Cowboy Feng's Space Bar and Grill" is arguably sci-fi but has a quasi-urban-fantasy feel to it IMO.

Also, while I can accept that there's probably good reason for leaving off H.P. Lovecraft (his Dreamlands works are definitely straight fantasy and are amazing, but since he's better known for horror and that's usually regarded as separate from fantasy - although you do have Anne Rice so whatever), you really really really ought to have Robert E. Howard's Conan and Kull stories. Whether or not you personally care for their style, they are well-written and genre-defining seminal works that have left a huge legacy over the entire concept of "low fantasy".
You either die Chaotic, or you live long enough to see yourself become Lawful.


Glemp wrote:To some extent, you need to be arrogant - without it, you are vulnerable being made someone's tool...for Herbert's sake, have the stubbornness not to submit to what you see instantly, because you can only see some facts at a time.

Posts: 7382
UStream Username: WearsHats
Location: Third star to the left, and straight on until midafternoon.

WearsHats
Profile
Joined: Mon Feb 25, 2013 11:35 am
UStream Username: WearsHats
Location: Third star to the left, and straight on until midafternoon.

Terry Brooks has written some other interesting books, even if you don't like Shannara, but I'm not sure they're essential. (I'm also not sure if we're counting modern fantasy like A Knight of the Word.)

R. A. Salvatore is best known for his Drizzt books, but I'd put his Demonwars series on the list.
Mostly offline/inactive due to chronic health issues. PM me if you really need attention.

"(Asks), why do you want to shoot all of my favorite animals out of guns?" - JibJib

► Show Spoiler
The Oatmeal's comics on proper grammar, including how to use an apostrophe and some commonly confused/misspelled words

The nerdiest official college cheer you will ever hear real cheerleaders perform at an actual sporting event.
Top 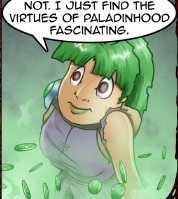 S. D. Tower's Assassins of Tamurin was to sneaky killing what Harry Potter was to magic. I don't mean to sound like a hipster to say you've probably never heard of it; so dedicated was this author to ensuring there is no franchise potential, that they seem to have created that pen-name just for the one book and seemingly doesn't exist otherwise. But as soon as I saw my go-to RPG character (cute girl, wearing all black, small blade in-hand) depicted on the mom&pop bookstore shelf, I knew this was going to be worth investigating.
The only one to pay attention to what happens in Goblins.
Top
Post Reply
54 posts