If Interest Picks Back Up 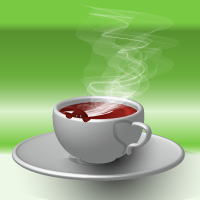 If Interest Picks Back Up

Because some of those latter lessons sound like things on my list of Stuff I'm Going to Want to Figure Out Around Here Anyway, a series of (relatively) short practice-type activities is a legitimate alternative to some of the other graphics program projects I've started (maybe I'm just slow, but you really don't want to know how long some of my running Photoshop documents have been being "worked on"....time actually spent working on them,...not so much), and the whole concept was cool, and well maybe now that there are more people around in general.....
To get to the point, Tea is crashing this course. Now, let's see who else shows up.

Note to self, next time, you're probably better off re-drawing the entire thing so that things remain consistent, the deconstruct and modify tactic just resulted in things being awkward in the latter two panels. Yes, by panel four, I was just ready to finish so the shading is horrid. Yes, now that I see problems, I know what to do for the next one. Also, I am aware that the bottom of panel 2 is not aligned with everything else, that is completely my fault, but it being buried in a clipping mask (Illustrator clipping mask, quite a bit more pesky than the Photoshop variety), I did not feel motivated enough to fix it.
Yes, I am aware that admitting that is a terrible thing to say when attempting to proving one's interest.
Top

You know, I just realised that I read this at the weekend and then immediately forgot to do anything about it... Sorry tea, I'm not ignoring you!

That's a really nice job you've made of the intro

The ONLY complaint I have is that the font is really hard to read. Sans serif is usually a bit easier on the eyes but you might get away with just using larger, regular (not bold) text.
Games I'm running:
The Wandering Archipelago (D&D 5e)
Top

Being myself either at or away from the computer at sporadic intervals, I only get back here today anyways.

Graphics programs, well, I consider myself pretty fair....but I've still got a few things to learn/master.

Type, point taken. Looks like I didn't take into account the forum's scaling of the image (it worked much nicer larger); now coming back, yeah, that's pretty much illegible.
Top

*sigh*
Sorry, a fortnight is a lovely and ample time, but I regret that this fortnight I may not make it (yet another terrible thing for trying to resurrect this). It is just, for me, a bad fortnight; too many things come up. If I can find spare hour or so to do something, I will. Or, I was considering combining a couple of the assignments to make things a bit more interesting, perhaps I steal that fortnight.

The end of the overwhelming workload approaches and soon I can get back to working on this stuff. In the meantime, while working on something unrelated, I will direct you to the Prospective Visitor's Entrance (is the entrance or the visitors prospective one wonders?) yes, it's still a work in progress but I've been up against a wall for awhile and finally got past it....this isometric space thing seems to be the perfect thing to do (or I was just proud of the crates I finally managed to pull off...)
Untitled1.png
Up Next, Tea's Lair, which will probably feature an abundance of wooden boxes which will look very familiar for some reason.... (in fact, they may even be the same wooden boxes, but we'd better not tell people that).

so I guess what I'm really saying is I'm still alive! I just have to get time to get back.
You do not have the required permissions to view the files attached to this post.
Top

(more people can come crash this, or I could be the only one

I had it working (for once) and then Illustrator just outright refused to open my file, so attempt 5 is now dead, but I finally think I know where this is going now, I don't have any pressing matters for the near future, and I should finally, be able to get this done. For a bit of expediency, I am however, going to try to cram as many of the assignments into one image as possible, because at this rate,....this would take forever. I'll try a fortnight again (I have time now), but it may not work.
Top

Awesome! looking forward to seeing what you come up with

The Great God School Challenge: fit every single assignment into a single image (or as many as possible). (I'm aiming for every single -1, adding animation might make this a bit too visually cluttered, so someone else get over here and try to beat me) (whoever can get everything +the small dungeon +the animation into a single piece...well..er...I really don't think I have the power to declare you the Ultimate Lord of Awesomeness, so lemme get back to you on that, 'kay!)

As the fortnight approaches, and I am nowhere near being done with this, I'm going to do a work in progress every fortnight until I finish the darn thing (I'm now severely determined) also, this has gone from short project status to quite a bit larger than that so I'm pulling out all the stop in an attempt to making something worthy of taking however long it's going to take. I therefore present you with the sketch in progress.
► Show Spoiler

needs more random clutter.... otherwise, this is finally something that could work (this is either attempt 5.2 or 6).
#2. Finally putting things in perspective, and the first appearance of the aforethreatened crate.
► Show Spoiler

the colorful thing is a clock in progress.
#3. way beyond a fortnight. not dead. not abandoned. just,...got put down for awhile. Now being picked back up.

IV. In Which Roman Numerals are Better and Splitting the Room into Two Panels. Considering switching over to a Photoshop/Illustrator combination.
► Show Spoiler

Whatever the next number is: I swear I finally figured how to get myself away from the brick wall I was up against (oddly, it just so happened to be a brick wall I was trying to get to cooperate) when Illustrator decided that it wanted nothing more than to let out a small cough, splutter, and die (i.e. it crashed and doesn't seem to have any intention of letting me make any progress on that particular document, again). Tea: you were kinda derailing it anyway,....my lair, not yours....you were seriously considering graphing various parabolas along the walls... A: point taken, round three.

27 September 2014
Not dead, just time to drag this reanimated corpse up off the floor. Good news, after however many tries I actually have a pretty good idea of where Tea HQ is, bad news, I get about halfway through drawing said HQ and I lose interest in the idea. *eyes pile of reanimated corpses* hence, er....all those poor blokes.
Tea: I'm invoking my ability to take things to the letter, therefore, your stewardship of my role in this trainee god thing has been much appreciated, but, now it is time for you to step down.
A: Wha-I haven'-have I?
Tea: a little.
A: oh,..er....sorry...I guess I could ferry you off to a pocket-dimension and let you have that, as long as you don't mind sharing it with a band of telekinetic kittens I think I shoved in there.
Tea: aren't I supposed to have a cat for a nemesis?
A: er,...that's not for an assignment or two, it should work.
Top

Re: If Interest Picks Back Up (or, Assignment 1/2)

Yes, this is another of my half-finished attempts at this, no, I'm not just putting this up because Illustrator has crashed again (and don't anyone dare try giving it ideas!), yes, I'm aware the resolution is terrible in this one, but this is the I'm still working on it when I can (albeit exceptionally slowly) and so this is where the project is going and I do not intend on giving up anytime in the future. Also, it has been ages since anything's happened over here, it was time.
You do not have the required permissions to view the files attached to this post.
Top