Has anyone considered Kore's "goodness" to be more along the lines of the Euthyphro Dilemma?
Top 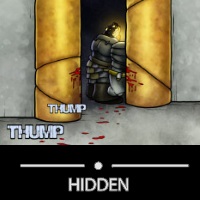 Demons. If you can shrug off 600 years of getting murdered and the destruction of your entire people, you can probably retain paladinhood while murdering as well. It'll all come down to whatever cosmic laws hell has decided should apply to Kore.
You won't sleep when you're dead either.
Top

Like, the question over who defines "good" as it relates to Kore? I haven't followed the discussion about Kore's paladin-ness in a reals long time, but yeah, if the question over what counts as "good" vs "evil" is subjective (i.e. each individual god decides what counts as "good" and "evil") rather than objective (i.e. the DMG says these acts are good) it could explain Kore and would be on-theme for the comic as a whole.

If morality is subjective, you could corrupt a god and corrupt the paladins. If it's objective, then Kore would lose his status.
Games I'm running:
The Wandering Archipelago (D&D 5e)
Top

There's a ton of unanswered questions. What god does Kore worship? What are this god's decrees? Is Kore even from the same world as the other characters?

If you need to know, the crux of the Euthyphro Dilemma is about is something "good" because a god says so, or is it good in itself? If it's the first, then "good" is whatever a god says is good. If it is the second, then there is a morality beyond the gods.
My thoughts about his paladin code brought me back to the de facto hierarchy of races in old school D&D.
Humans: mankind. Usually the dominant race in old school D&D
Demihumans: races like elves, dwarves, halflings, etc. The races that, in the modern world, wouldn't look TOO out of place
Humanoids: the so-called "monstrous races." Goblins, orcs, etc. Usually evil
In that era of D&D, only humans and demihumans were really allowed for PCs. There were rules for humanoids, but they have tons of problems

It's entirely possible that Kore's god follows this old hierarchical setup, decreeing that "humanoids are evil" like in these older editions of D&D.

If I wanted to get meta, then what if Kore is a character from a previous campaign? One using the older rules and tropes.
Top

Gazirra wrote: ↑
Sat Jul 20, 2019 11:56 am
It's entirely possible that Kore's god follows this old hierarchical setup, decreeing that "humanoids are evil" like in these older editions of D&D.

I don't know the D&D rules, but even if it were a "humanoids are evil" rule, you should note that together with humanoids (the GAP) and a demi-human (Forgath), he also attacked a human (Minmax) on the bridge without even trying to detect evil. (Granted, that human was between him and the humanoids, but is that enough of a reason to allow collateral damages for a paladin?)

Also, IIRC from older Kore-related threads, in a D&D setup, Good / Lawful don't depend on a god's point of view, but are universal laws or something (some expert D&Ders could explain much better).
Top
Post Reply
5 posts • Page 1 of 1